OtherSide Entertainment has sent over some screenshots for Underworld Ascendant, which the developers says shows the new "authored look" for its modern follow-up to LookingGlass' Ultima Underworld series.

The artwork for Underworld Ascendant is being handled by Nate Wells, who worked as the art director for BioShock Infinite, The Last of Us, and Rise of the Tomb Raider.

“There’s a ‘reality bug’ going around in TV, film, and games,” says Wells, “where fantasy has become inundated by gritty photo-realism. With Underworld Ascendant, I want to bring back more whimsy and less brooding.”

Looking for more games like Underworld Ascendant that are coming out in 2016? Check out our list of Upcoming PC Games.

“I asked myself, ‘What if the world bore the authorship of a tabletop game?’” Wells says on the look’s stylistic origins. “Think of the old lead figures and miniature play fields… Everything appears hand-crafted, as if sculpted by an artist, with a genuine sense of levity and naiveté to the art.”

“The authored look is a unique counterpart to Underworld Ascendant’s Improvisation Engine,” says OtherSide creative director and founder Paul Neurath. “It’s a look that invites the player to interact and explore with the world in a more tangible way.”

“This will be an Underworld for the 21st century,” notes OtherSide Austin studio director Warren Spector, who worked with Neurath on the original Ultima Underworld and System Shock games. “It’s a modern continuation of LookingGlass’ design tenets, where players are empowered to tell their own stories.”

Underworld Ascendant was successfully crowdfunded on Kickstarter early last year, with backers pledging $860,356 to help bring the project to light. Those backers will get access to the game’s latest update later this month when Prototype Access is made available.

Isn’t there supposed to be a Stygian Sentinel today?

For a moment it looked like there’s a single star in the distance in the second picture (it’s actually a floating ember, I think). In almost all of these preview screenshots we’ve seen the scale of things looks huge for something that’s supposed to be underground. Which is cool, but I hope that there are still plenty of dingy, claustrophobic places to balance that out.

Overall it looks good but a lot of the details are “off” in one way or another. The colors remind me of the original Unreal, which is a very good thing.
Still think that sword looks goofy though.

Isn’t there supposed to be a Stygian Sentinel today? 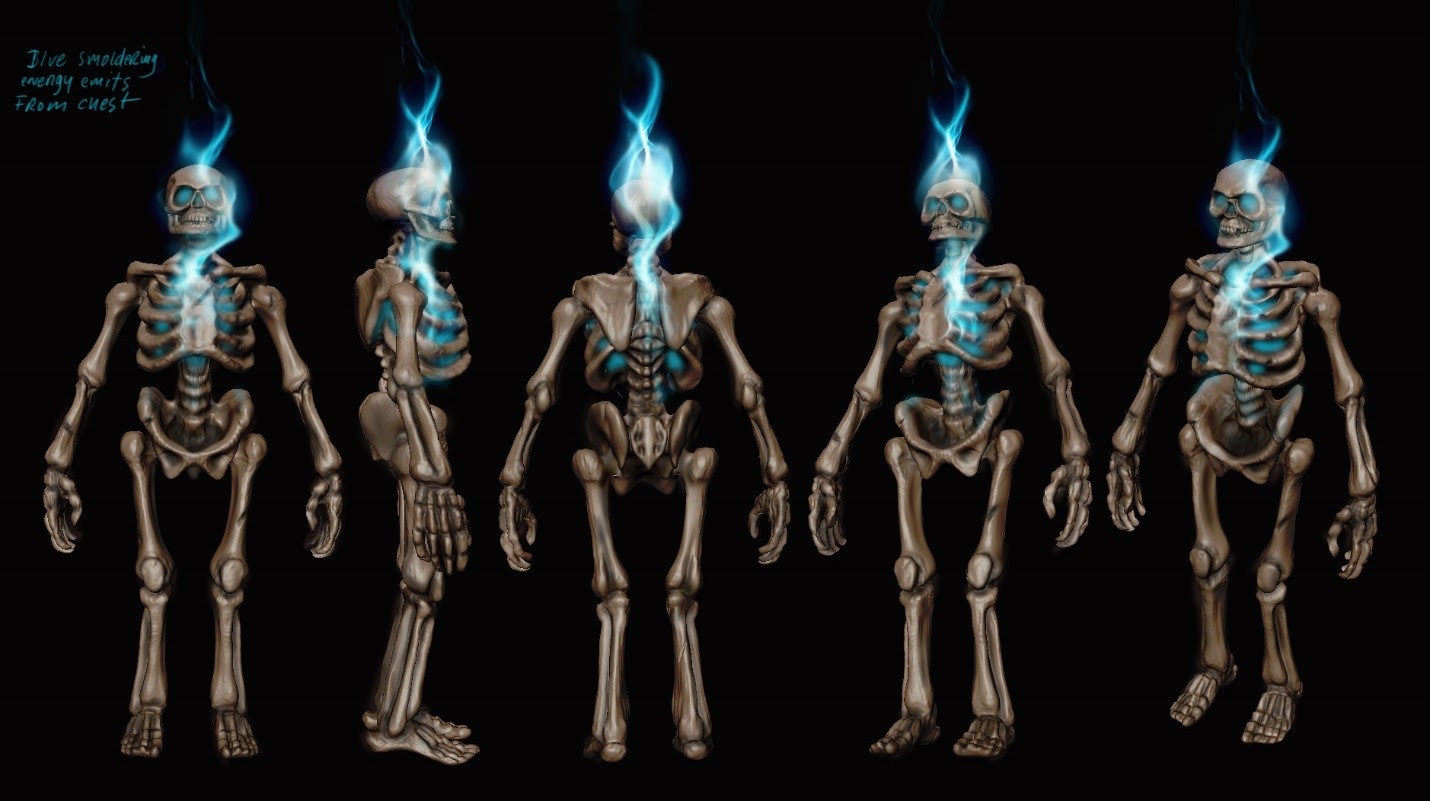 I like the will-o’-the-wisp inside the chest of the skeleton. Gives more impression that the magic moves the bones.

While I can see how the Ultima Underworld 2 skeleton evolved into this, I’m not really fond of the style. Its extremely thick and squat, so unless this is a dwarven skeleton, the proportions look off. The hands and feet are blocky, and the whole thing looks like its made of wax or plastic. The entire scene is too bright as well.

I was hoping that was just the shader, but the concept art looks exactly the same.

Looks like 90’s CGI cutscene graphics. I guess it’s both, critique and compliment. Not a big fan of this. I really hoped for immersive (yes, “realistic”) graphics, to dive into the world and believe I’m there. Don’t think this could be achieved with cartoon art style as effectively.

Anyone played the Legend of Grimrock games? Gorgeous graphics, rich colours, great design, fantastic level of immersion, I expected nothing less than that from an Underworld game.

I dig the style behind the skeleton. Reminds me of how I pictured Everquest in my head back in the day.

While I can see how the Ultima Underworld 2 skeleton evolved into this, I’m not really fond of the style. Its extremely thick and squat, so unless this is a dwarven skeleton, the proportions look off. The hands and feet are blocky, and the whole thing looks like its made of wax or plastic. The entire scene is too bright as well.

I was hoping that was just the shader, but the concept art looks exactly the same.

I’m wondering if this is indeed a Dwarven skeleton or a product of the new “crafted” art style. As far as a Human Skeleton goes, there are several anatomical differences (the number of ribs and vertebrae are off, the elbow joint looks exaggerated/it’s unclear what bone the olecranon is coming from, the knee joint is sloped anteriorly, etc).

I’m glad that there’s an update coming later. I want to record a new video.

Looks like 90’s CGI cutscene graphics. I guess it’s both, critique and compliment. Not a big fan of this. I really hoped for immersive (yes, “realistic”) graphics, to dive into the world and believe I’m there. Don’t think this could be achieved with cartoon art style as effectively.

Anyone played the Legend of Grimrock games? Gorgeous graphics, rich colours, great design, fantastic level of immersion, I expected nothing less than that from an Underworld game.

This exactly. I was really excited about the original concept art, which is part of what sold me on the game, and this…isn’t that. I was expecting more realism and less cartoon. If this is what the art style is, I’m personally quite disappointed. I was worried when I first heard the description of this “new style”, and it sounds like my concern was justified.

Before everyone who is fine with this style sets me alight, remember that this is an opinion. If different than yours, that’s ok. I fully understand that the dynamic emergent gameplay is the main selling point of UA, but the thought of that - in the art style of the original concept art - is what had me so excited. The new style will, for me, make immersion into this world more difficult. Just my $0.02. YMMV.

As you may’ve already seen, we revealed Underworld Ascendant’s new “authored look” to the public today. Again, the art style is the brainchild of our art director Nate Wells, who joined the team last fall and worked previously on the BioShock series, The Last of Us, and System Shock 2.

Return to The Stygian Abyss

In Nate’s own words: “I want to recapture a retro sense of fantasy, fantasy the way our inner child remembers it. For Underworld Ascendant, I thought, ‘What if the world bore the authorship of a tabletop game?’ Think of the old lead figures, the miniature play fields. What if the game used that philosophy of everything looking and being hand-crafted? Natural, man-made. All of it looks like it was sculpted by an artist.”

We gave backers an early glimpse before, but these latest shots show the first look at creatures in this style. Specifically, some of Underworld Ascendant’s bony undead.

Underworld Ascendant’s undead have a parasitic relationship with the world’s magic supply.

The player is ready to explore, but first� combat!

They’ve come a bit since Ultima Underworld 2, don’t you think?

Like what you see? Discuss with our developers and fans on Underworld Ascendant’s forums.

Many thanks! Because of your efforts, we’ve reached the $925,000 stretch goal and unlocked THE WAILING HAUNT – the shrieking, spectral undead being seen here.

click for a larger image
Concept art by Robb Waters

Next up at the $950,000 Reward Tier is THE NECROPOLIS OF THE ANCIENTS, the intended home of many of the most powerful undead in Underworld Ascendant.

If you’re considering raising your backing or spreading word about our game to friends, here are two things worth not forgetting:

Those who back at PIONEER’S PROGENY tiers and above receive a digital copy of Underworld Ascendant for a discounted rate below the game’s final retail cost. (And crowdfunding won’t continue forever.)
2. Backers with PROTOTYPE ACCESS will soon be able to explore the world seen in today’s screenshots when we release our new “Beautiful Corner” update later this month.
Your help could allow us to add THE NECROPOLIS OF THE ANCIENTS to the Underworld Ascendant. Pledge Now.

NOTES FROM THE UNDERWORLD

In case you missed it, OtherSide had a few notable birthdays recently…

Please join us in saying happy birthday to both SHODAN and The Stygian Abyss! (They’re 22 and 24 years old now, respectively.) Here’s to many more.

That’s it for this edition of The Stygian Sentinel. For more on OtherSide, be sure to add us on Twitter and Facebook and subscribe to the System Shock 3 newsletter!

I’d like to say that I am a fan of the colourful new vision of the world, but I also gotta say I hate the skeleton design.

What’s wrong with their faces? Their noses are weird, their teeth look grotesque and not even the good type of grotesque. I do like the blue glowing inside their ribcages, but something needs to be sorely done about their heads. They are not ugly in the way that good monster designs are - they are just a sore on the eyes.

Normally I don’t bother with criticism, but I really hope that Otherside looks into other skeleton designs and provides a different model for the game.

Maybe the skeletons will look better when we see them in motion later this month. 3D models often look kind of derpy up close like that.

Well, i also hate to say this but I´m not convinced by these screenshots :’(… Where are all those lights coming from? I´m not against a less realistic look of the game per se, but the screenshots seem very busy and even difficult to understand. The skeleton is a bit strange, but I will reserve my judgement until I see it in movement.

Yeah, there are a bunch of things I want to comment on but I have a feeling they might look somewhat different in motion. As for the skeletons, the helmet in the first pic strikes me as dwarven so it wouldn’t surprise me if the skeletons are as well, but even then they look a bit odd. If you told me there’s going to be skeletons in a game, I’d expect them to look like they did in Jason and the Argonauts.

I really like the look of the ruins. Main thing that concerns me is the purple light in the background. I like the way it looks but it doesn’t appear to have any source. Unless the off-screen tip of the statue’s staff functions as a giant magical lighting fixture. Which would be cool, especially if you could extinguish it somehow and make things a whole lot darker.
I’m more interested to see what’s interactive, where I can traverse, etc.

I really dig the fact that the skeletons are wearing helmet and weapons like in UW1 again. Always liked the look of the UW1 skeletons more than their goofy-looking UW2 counterparts. 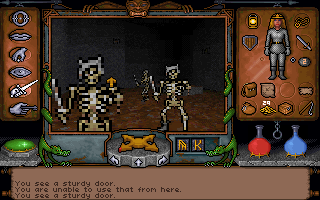 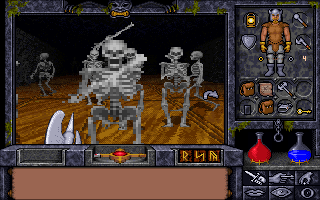 Giving a weird, surreal and unique style to UA isn’t a bad thing. Maybe a more realistic and common artstyle could ruin the game because, you know, many people could say: “Oh! Skyrim underground!”
I hope that they will create different models for skeletons (human, dwarves, elves).