A System Shock-like game, and it’s even being developed in the same city as System Shock 3 will.

I can’t imagine that Warren Spector, industry insider that he is, didn’t know about this game’s existence. How is OtherSide going to handle this?

This leaked years ago (including that Arkane was dropping the original concept for Prey 2 and doing a System Shock-style game) so I can’t imagine the SS3 team was blindsided or anything.

I say bring them both on. I’ve loved every Arkane game so far, so I’m sure I’ll love this one.

A System Shock-like game, and it’s even being developed in the same city as System Shock 3 will.

I can’t imagine that Warren Spector, industry insider that he is, didn’t know about this game’s existence. How is OtherSide going to handle this?

Most of the competition I’ve seen is not between developers, but between IPs and publishers. I’m assuming their is a “shared space” for both IPs.

So was that “leaked design document” some years ago was for real then?
I just hope they’re going all-in this time and meet the potential of the Immersive Sim as I know full well they can, but have been holding back because men in suits and a majority share of the audience seemingly with the attention span of a fly.

I’m 90% sure the “design document” was bogus. What leaked were some emails that showed the game was being made.

And no authored look…

Dishonored has an authored look, though.

I’ll say it again. We love Arkane. There is more than enough room in for these type of games to co-exist.

As Warren said on Twitter yesterday, “A little competition just makes everyone better.”

Personally, I think there’s plenty of room for multiple interpretations of “sci fi immersive sim w/ compelling narrative.” (Just look at how different Dishonored is from Thief, for instance, for a more fantasy-ish genre.)

Anyway, long story short, I’m a huge fan of their work and can’t wait to play.

I love Arx Fatalis a great deal, not so much Dark Messiah or Dishonored, though they were still both fun games.

Well, even if there is no room, three System Shock games are still being made if you include Prey, and I don’t have a single problem with that. That’s three times the odds that at least one of them gets it right, and the odds are always slim these days.

So, Immersive Sim developers, yes, please do compete. I’ll be the judge for best design.

You could also drop Deus Ex - Mankind Divided into the same pot. Or even Consortium - The Tower. There IS plenty room for more sci-fi 1st-person-games …

Yeah well it’s already a given that the new Deus Ex game isn’t going to get it “right”, the Immersive Sim part.

In a nod to the leaked emails, in which Raphael Colantonio referred to the game press as “press sneak f*cks,” he wore this shirt to the Prey reveal at E3: 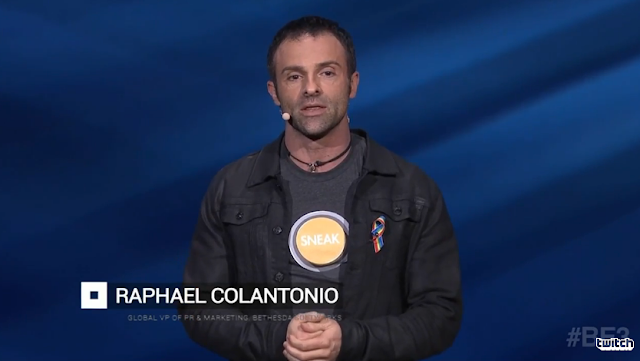 I’ll say it again. We love Arkane. There is more than enough room in for these type of games to co-exist.

In cases like this, it probably ends up being beneficial. I think it’s one of the reasons Deus Ex Human Revolution was so much more successful than the first two. People had a frame of reference to understand the kind of game it is. There were people that can say “Oh, it’s one of these games, I like these.”

Arkane are really becoming one of the torchbearers of Looking Glass-inspired design, and by making those sorts of things more accessible, and even by calling out specific influences like System Shock, they’re strengthening the market for these games. Saturating it would be a problem, but there’s nowhere near that many right now.

Not to be fussy, and I actually agree with your overall point, but… “becoming?”

I would say Arkane rightly deserves to be credited with keeping that flame burning after Looking Glass shut down and for the years thereafter. Arx Fatalis, Dark Messiah: Might & Magic, and Dishonored all, in various ways, were efforts to make games that captured the essence of the Looking Glass philosophy of design.

Certainly Bethesda’s games also showed sparks of that “simulate systems, let them interact, and let players decide how to use them to solve challenges” mindset. But I don’t know of any other game development studio specifically formed out of an admiration for the kinds of games Looking Glass made, and a determination to see more such games made, as Arkane was.

The business with Human Head Studios through which Arkane Austin got to work on Prey, if the stories are true, is a bit of a blot on the Arkane escutcheon. (Or perhaps that of Bethesda. Maybe both.) But that doesn’t change the fact that Arkane has been one of the few developers making Looking Glass-like games ever since Looking Glass.

Here’s hoping that spirit infuses the new Prey as well.

I agree with Arkane, but not really with Bethesda. For me Beth is pretty much the incarnation of “Eh, what, something new…? Really? Better luck next time…” and overall quite generic story telling and gameplay. They sometimes try, but the “spark” is quite dim, imho.

I agree with Arkane, but not really with Bethesda. For me Beth is pretty much the incarnation of “Eh, what, something new…? Really? Better luck next time…” and overall quite generic story telling and gameplay. They sometimes try, but the “spark” is quite dim, imho.

When I survey the field of computer games over the past 20 years, I can only be glad that there have been at least a few game development studios that try to offer player-centric designs, rather than another game that’s about frog-marching every player through what the lead designer enjoys.

That’s not to dismiss bugs or unsatisfying content. But I believe that if it’s proper to criticize those areas where a developer is felt to come up short, it’s also proper to give that developer appreciation and encouragement for making the effort to deliver world-simulators that respect how different players like to have fun. There have never been, and may never be, enough of those.

I do appreciate that Bethesda puts so much emphasis on their sandbox, but boy do I find a lot of their stuff bland – increasingly so the older I get. But there’s no doubt that they have always been heavily influenced by LGS. Those early Elder Scrolls games were clearly riffing on Underworld, especially Arena. And one of the leads on their Fallout games is Emil Pagliarulo, who worked on Thief 2.

Bethesda may be bland, but I do enjoy their games if you consider them big, dumb, exploration sims. There aren’t enough exploration-driven gameplay sims in my opinion, so despite being very vanilla, I think they create a hugely explorable overworld very well. I would point out some of the neat architecture in Morrowind as an example, and their odyssey with increasingly non-cliche creatures, such as floating jellyfish (though I wish the ecosystem was explained better, and lore provided clues as to how these ‘miraculous’ fantasy creatures had each evolved, and for what purpose, and how they tied into the world design.)

Where I have always have complaints is with their dungeon design. In Morrowind, the dungeons were too tiny, compared to their world map. In Oblivion, reuse of textures and level scaling ruined the experience. With Skyrim, the dungeons all went in one direction, like a ball of yarn unwinding, with mandatory puzzles thrownly glaringly into your face between each segment of the dungeon. I am tired of being shepherded in one direction. I quit playing early one, but that was my opinion of Skyrim. Not to mention all the arrow to the knee jokes, when they had this huge, deep mythos of Nordic lore to draw upon.

They are going to need to really push the envelope with their next Elder Scrolls entry to impress me.

Also, I like how Lands of Lore II created their puzzle design. You could solve almost the entire main quest without solving a puzzle, but their were tons of neat, hidden crannies full of loot if you wished to solve non-mandatory puzzles along the way. This way, the quest is unhampered if the PC can’t figure out a puzzle, but they are rewarded for exploration and puzzle-solving as an aside from the main quest.

Given how far along Prey is in development and that System Shock 3 is still in pre-prod, I doubt these two will release close enough together to be in any kind of direct competition.

Arkane is a fine dev, I enjoy pretty much everything they put out.